A downloadable game for Windows, macOS, and Linux

MoonQuest is a procedurally-generated adventure game. Each game generates a new world to explore with wild forests, giant mountains and ancient ruins. Harvest resources, find treasure, and forge the weapons that will help you on your journey.

"There's an inviting strangeness to it." PC Gamer

Every game in MoonQuest features a unique, procedurally-generated world to explore. Each world contains a variety of regions, each with their own resources, wildlife, enemies, merchants, weather, and moon. Delve into the caves below the forest to find rare metal ores, adventure into ancient ruins to discover powerful items, and find the lost cathedral to discover its secrets.

Each world you generate may contain numerous resources to mine or harvest, such as ores, plants and wildlife. Use these resources to forge items or build structures to help you on your quest. Some of the valuable resources you can mine include silver ore, sugar, bones and crystals.

The world in MoonQuest is fully destructible, so you'll be chopping through thick vines to gain entrance to lairs and demolishing walls to infiltrate castles and ruins. Some challenges in the world may require specialised tools to overcome, but the challenges are always surmountable.

Some examples of regions you may encounter are:

The world in MoonQuest is surrounded by a number of strange moons. Each new game uses a randomly generated set of moons, each with subtle influences on the landscape below it. Some of the moons you may encounter are:

There are hundreds of items to discover and craft, including weapons, tools, and armour. These items may be hidden deep within a mountain, in the cellar of a merchant, or locked away in a dungeon. Finding these items will help you not die. In the town you'll find merchants and crafting tools, and by locating the right currency or resources you can buy, forge, cook, or weave many useful items. Some of the items in MoonQuest are:

Can I use a controller? Yes, the game supports a wide-range of controllers. However, we recommend playing MoonQuest with a mouse and keyboard.

What are the minimum requirements?

Is there an official soundtrack? Yes! It is called NoonGuest and was composed by Aliceffekt.  Go and listen to it!

Windows: You can play the game by double-clicking the icon.

Linux: You can play the game by running ./moonquest.sh from the command line.

MacOS: You can play the game by ctrl-clicking the icon and selecting Open. See this article for more information.

Itch.io app: The game can also be run from within the Itch.io App.

In order to download this game you must purchase it at or above the minimum price of $19.99 USD. You will get access to the following files:

Help me, i have all the moonstones except the igniting moonstone and I'm currently in the volcano but if I die, I die forever!

game looks awesome, but could you add a demo so I know what i'm gonna be playing

Ahoy. Is there controller support on the mac ver of moonquest? Looks like a good time.

Yep, there sure is. Tested with a ps4 controller, but other common controllers should work.

Already bought it. Nice vibes. Thanks.

what if you try to make this game for free just for today?

News: A player named YotamSh has completed MoonQuest in under 10 minutes! What a tremendous effort. Congrats!

is there two player? I want to be sure, I'm running low on my monthly data plan and want fun party- or multiplayer games for home.

In that case the splash/header image is pretty misleading. Just sayin'!

will there be steam keys? (didnt get a choice when i bought the game only itch existed...)

I don't have that planned yet, sorry.

i can have the macOs version only if i buy on itch?

Yes the macOS and Linux versions are only available on Itch.

what engine do you use for this game?

Hi, I built a custom engine for this game.

Oh, cool, i use godot engine, do you like it?

would you benefit from me purchasing it here or on steam? i'm thinking of getting it and streaming it on fridays

There are benefits to either, so choose whatever you like. Enjoy the game!

i will! ill be streaming it this friday now that i finally got the chance to do it lol

Is it going to be in Steam?

Sux that people instantly revert to steam. They get less money from sales there. But, they could sell a steam key on here..

The game is now finished! Check the devlog post for the full changelog. Enjoy!

Awesome! Featured you on the homepage

I haven't even played the game yet and I already feel this excited, thank you game developers and game itself! (Looking forward to it!)

New build is online! It includes a new character, ragdolls and many improvements.

I haven’t played this yet, but it looks really great. If you released it on steam it could make a huge profit I think.

Is there going to be a Mac version?

Yep. Hopefully in a couple of months.

I just uploaded a new build with bats, new crafters, combat improvements, and more! Read the full build notes here. Play MoonQuest during a full moon (or near enough) to unlock the Werewolf playable character. He drinks from a Blood Chalice and becomes frenzied.

It's cool to finally see MoonQuest out and playable, even if it's still early on. I've only just begun my adventure, but can really see the potential it has in terms of crafting and exploration. The music comes off as a bit limited and on the quiet side, but the visuals are all quite nice, carrying a quirky style in everything you see. I'm definitely curious to see what will happen in my continued adventures

Streamed the game recently and thought I might share. (The latter half has more of the good bits and feedback.)

The game is coming along nicely, but I feel it needs a bit more direction as far as story goes. You're told to find the Moon Stones and...that's it. Once you leave the starting room, you're running blind. I can only assume they're found in the deep cave areas, behind many doors. Combat also gives me a hard time if I don't luck up on some gear in a chest, though it's fun finding ways to avoid or outrun danger.
Reply
eigenbom4 years ago

Thanks for the Let's Play and the feedback! The game will eventually have a proper quest system with sub-goals, which will make things much clearer.

I see keys in the MoonQuest package. What are they for? Whoops, ignore those! They were for a legacy version of MoonQuest and are no longer needed.

You should be able to delete them from the "external keys" page if you don't need to hand them out anymore. Click on the page that takes you to the listing and scroll way down. Tell me if you have any issues.

Thanks Leaf, Yeah I already did that, and sent an email a few days ago asking itch to remove the assigned ones too.

Hey, played a bit of this on my channel! Only barely dipped my toe into it, though, so I might have to do some more. Really loving it, so far!

I have now spent a good many hours playing the game and I love it. I'd say if you like the idea of a rogue-like mixed with an endless exploration of the weird then you ought to enjoy Moonquest a lot. You have limited lives and sometimes you get unlucky and it's game over, but within seconds you're back to exploring a completely new & weird world. That you have limited chances before you start into a new world is probably my favorite thing about the game. It's not an endless exploration of a single world, it's like sitting down to a completely new challenge every time.

Congrats Ben, so excited to see that this is finally out! - Matt

*You no longer explode when climbing ladders.*


I would call this a feature not a bug.

Does buying the game here come with a Steam key?

Nope. It does come with a "game key" which seems to be a string of randomly generated words (distinctly not a Steam key), but I have no idea what its intended function is.

My mistake! Those keys do nothing. Ignore them!

Nope, just the DRM-free game. It also works through the itch app.

Looks very kooky.  I am a fan of this level of madness. So excited it is out!

12 dollars? you've been working on this so long and I've been following so long I feel I should be paying 1200 dollars. But Ima just pay 12 dollars because I don't actually have that much money.

Reply
a Cloaked Figure4 years ago(+1) 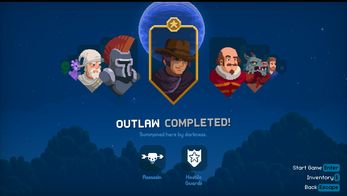 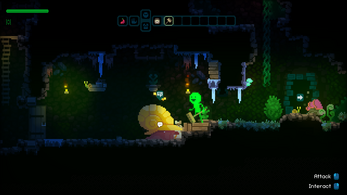 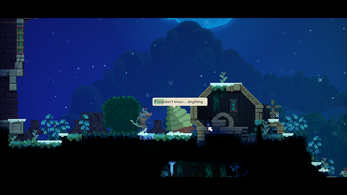 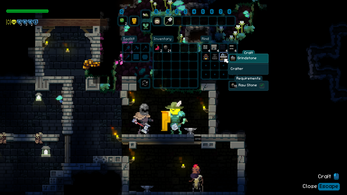 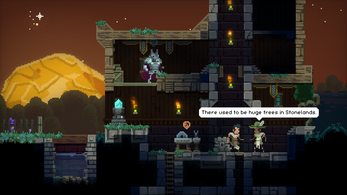 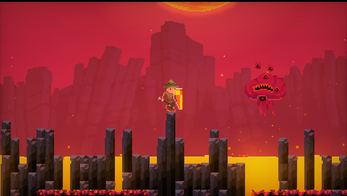 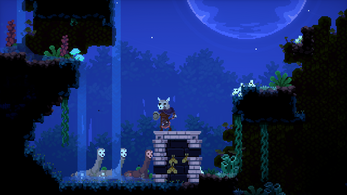 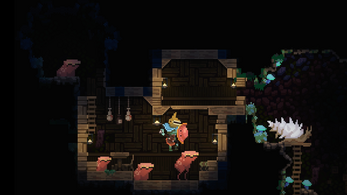 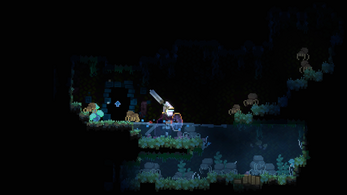 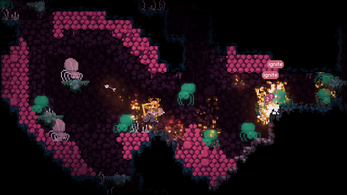 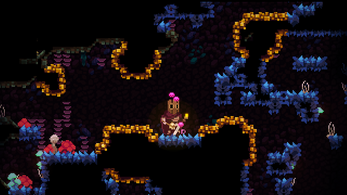 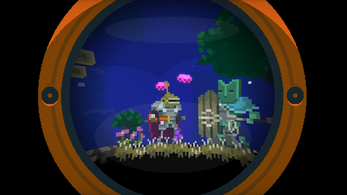 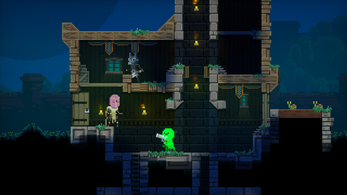 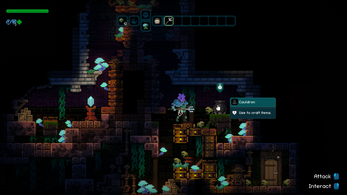 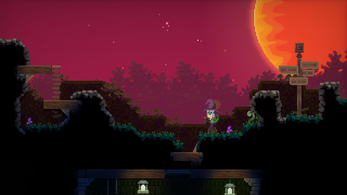 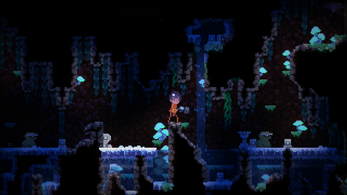 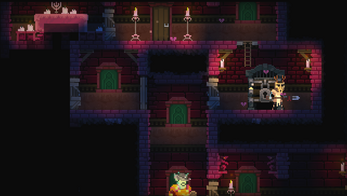 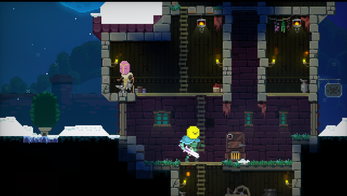